Whale watching is growing in popularity and people are becoming increasingly aware of these gentle giants of the sea. To engage in whale watching, 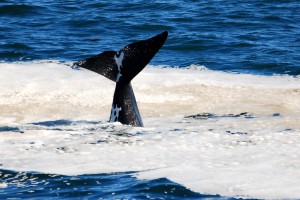 you can go out on a boat but whales are often observable from shore. Whales are becoming a favorite fascination of beach goers and tourists alike.

The two main whale species are the Southern Right Whale and the Humpback Whale. Both are large (16  meters and over) and according to scientists whales sighted off the east coast are in transit from feeding grounds in the Antarctic to breeding grounds in Mozambique or even Madagascar.

The voyage north past the South Coast of KwaZulu Natal is undertaken during June and July, while the return journey, often with calf in tow begins in August and September with some late stragglers drifting past Scottburgh in November and December.  Occasionally energetic behaviors such as breaching (belly-flops and side-flops) and tail slapping are undertaken presenting a photographic treat to the lucky witness.  The Humpback whale is also known as the “Merry” Whale as they are far more boisterous than the relatively docile Right Whales and seem to indulge more frequently in acrobatic displays of prowess, especially the males.

Whale watching in Scottburgh is best from the restaurant at Umdoni Golf Club but if you bring binoculars you may also be able to do some whale watching from your balcony at Pearly Shells Holiday Apartments in Scottburgh if you are visiting the South Coast of KwaZulu Natal between June and October or even November/December.